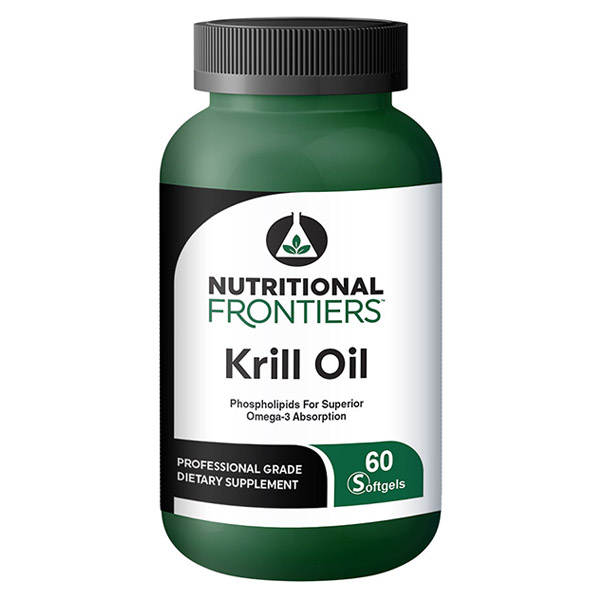 Krill Oil, which naturally contains a unique blend of omega-3 and omega-6 fatty acids, phospholipids and choline, as well the antioxidants: Vitamins A and E and astaxanthin.

Antioxidant Support:
• Krill Oil has potent antioxidant activity. It has a ORAC value of 378 (fish oil has an ORAC value of 8).
• These antioxidants support health, but also stabilize the fat to keep it from getting a fishy taste.

PMS Support:
• Phospholipids, DHA and EPA work together to reduce the discomfort associated with PMS. Phospholipids also exert a balancing effect on certain important brain neurotransmitters that affect the emotional and psychological aspects of PMS.
• Research studies indicate that women consuming Krill Oil experienced less abdominal swelling and discomfort during the menstruation cycle. It has been shown to help alleviate cramps, water-retention and mild mood changes associated with PMS.

About Superba™ Krill
Superba™ Krill is a pure, natural source of the health-promoting EPA & DHA omega-3 essential fatty acids and the naturally occurring antioxidant astaxanthin. The uniqueness of SuperbaTM Krill is that the omega-3 fatty acids are provided in phospholipid form. In vitro, in vivo and human clinical research has demonstrated the safety and efficacy of Superba™ Krill.

Further, Superba™ received “Novel Foods Approval” at extended use levels last month, which means that it is the only standard krill oil in the EU allowed to dose more than 250 mg EPA/DHA (up to 3000 mg) per day – other krill oils on the market cannot go beyond 250 mg.

Because these cookies are strictly necessary to deliver the website, refuseing them will have impact how our site functions. You always can block or delete cookies by changing your browser settings and force blocking all cookies on this website. But this will always prompt you to accept/refuse cookies when revisiting our site.

We fully respect if you want to refuse cookies but to avoid asking you again and again kindly allow us to store a cookie for that. You are free to opt out any time or opt in for other cookies to get a better experience. If you refuse cookies we will remove all set cookies in our domain.

We provide you with a list of stored cookies on your computer in our domain so you can check what we stored. Due to security reasons we are not able to show or modify cookies from other domains. You can check these in your browser security settings.

If you do not want that we track your visit to our site you can disable tracking in your browser here:

We also use different external services like Google Webfonts, Google Maps, and external Video providers. Since these providers may collect personal data like your IP address we allow you to block them here. Please be aware that this might heavily reduce the functionality and appearance of our site. Changes will take effect once you reload the page.

The following cookies are also needed - You can choose if you want to allow them: