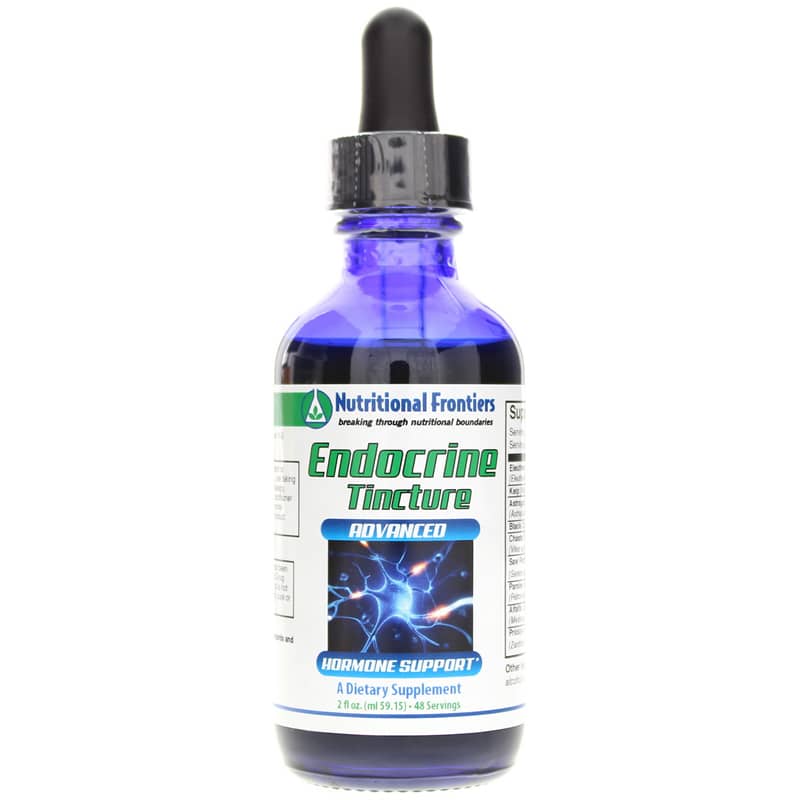 This herbal tincture is specially formulated to support the endocrine organs and balance hormone production.

Eleutherococcus senticosus, also known as Siberian ginseng, is native to the Taiga region of the Far East. Healers have used Eleutherococcus for 2000 years. This adaptogenic herb targets adrenal function. It may improve attention, alleviate depression, and increase tolerance to stress. It is useful for people who are debilitated from cardiovascular disease and other chronic health conditions.

Parsley root (Petroselinum crispum) is native to the Mediterranean but now enjoys widespread use as a culinary herb. It is a potent diuretic and tones the urinary tract. Parsley root has been used historically to help the following conditions: urinary tract disorders, digestive problems, liver disease, painful menstruation, high blood pressure, allergies, and bronchitis. Some herbalists suggest that parsley root can help hypoglycemia caused by adrenal malfunction. Parsley root contains numerous vitamins and minerals including vitamin C and calcium.

Astragalus membranaceus is an adaptogen used extensively in Traditional Chinese Medicine as a Qi (chi) tonic. Astragalus has affinity for the immune system and is often combined with ginseng to improve stamina and energy levels. Astragalus may also increase bile flow to improve appetite and digestion.

Alfalfa leaf is thought to be an alternative for the endocrine system. Alfalfa may also support digestion by stimulating the flow of bile. Alfalfa has a high nutrient content including protein, calcium, zinc, iron, and vitamins A, B1, B6, C and K. It is well indicated for a deficient person with lack of appetite and general weakness.

Prickly ash bark is a North American plant that has been used medicinally as a digestive aid and to strengthen the nervous system. Herbalists have used prickly ash (also called Zanthoxylum) for a wide variety of complaints including toothache, sore throat, upset stomach, various infections, and rheumatic conditions.

Chaste Tree Berries are commonly used to make medicine and are sometimes referred to as “the women’s herb”. Premenstrual syndrome and menopause are just a few of the issues Chaste Tree Berries are used to help. Some men who used this fruit found an increased flow of urine. This fruit has also shown some improvement with acne, nervousness, dementia, joint conditions, colds, upset stomach, spleen disorders, headaches, migraine, eye pain, and body inflammation.

Because these cookies are strictly necessary to deliver the website, refuseing them will have impact how our site functions. You always can block or delete cookies by changing your browser settings and force blocking all cookies on this website. But this will always prompt you to accept/refuse cookies when revisiting our site.

We fully respect if you want to refuse cookies but to avoid asking you again and again kindly allow us to store a cookie for that. You are free to opt out any time or opt in for other cookies to get a better experience. If you refuse cookies we will remove all set cookies in our domain.

We provide you with a list of stored cookies on your computer in our domain so you can check what we stored. Due to security reasons we are not able to show or modify cookies from other domains. You can check these in your browser security settings.

If you do not want that we track your visit to our site you can disable tracking in your browser here:

We also use different external services like Google Webfonts, Google Maps, and external Video providers. Since these providers may collect personal data like your IP address we allow you to block them here. Please be aware that this might heavily reduce the functionality and appearance of our site. Changes will take effect once you reload the page.

The following cookies are also needed - You can choose if you want to allow them: