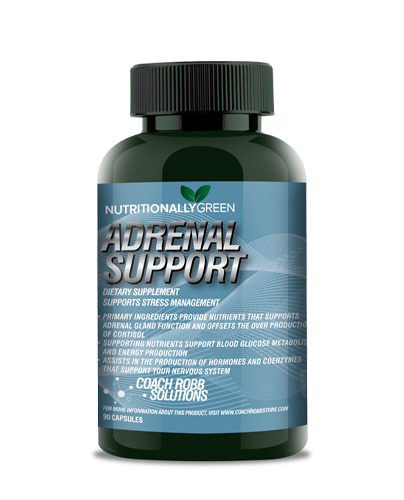 A good component of the Coach Robb Solutions series of programs

A vegetarian formula of herbal adaptogens to provide basic support for adrenal function.

Like all our supplements, Adrenal Support is made of only the highest quality to ensure that your body can absorb the ingredients for maximum effectiveness.  Your body’s ability to absorb what you consume is commonly referred to as bio-availability (a fancy way of saying your body is actually absorbing what it is consuming verses passing it as waste).

Higher Quality and Absorption Means Exceptional Value To Your Performance

With the ingredients being of such high quality, your body will absorb a higher percentage of the Adrenal Support which will provide you with all of the associated benefits and less being lost in your urine. Products that are not of high quality are not absorbed by the body and pass through your system as waste.

Remember, when it comes to nutrition what you absorb is as important as what you eat!

WARNING
This product contains licorice. Women with hormone sensitive conditions should avoid using licorice. Do not take this product if you are pregnant, diabetic, have hypertension, congestive heart disease, liver disease or kidney disease. Not recommended for use by individuals under the age of 18 or without parental permission.

KEEP OUT OF REACH OF CHILDREN.

* This statement has not been evaluated by the Food and Drug Administration. This product is not intended to diagnose, treat, cure, or prevent any disease.

What Is Adrenal Support?

What is included in Adrenal Support?

• Panax ginseng is also called Chinese ginseng or Asian ginseng, and has been in use since at least the 1st century C.E. Its many constituents, such as ginsenosides and panaxans, contribute to systemic effects such as supporting immune function, lowering blood sugar, improving libido and erectile dysfunction, increasing sperm count, and enhancing physical and intellectual performance.

• Eleutherococcus senticosus has a variety of applications in the body, such as improving attention, mood, and stress tolerance. People who are debilitated from cancer, chemotherapy, cardiovascular disease, or other chronic health conditions may benefit from this root. Also known as Siberian ginseng, this has been used by herbalists from many countries for at least 2000 years. Eleuthero is stimulating and warming.

• Ashwagandha (Withania somnifera) root is native to Sri Lanka, India, Africa, and Pakistan. A relaxing adaptogen and tonic, this plant is useful for ‘building up’ people who are debilitated from long term stress. Ashwagandha helps in both acute and chronic stress conditions as well as those struggling with insomnia, inflammatory diseases, and anxiety.

• Rhodiola rosea root has been used in Siberia, other parts of the former Soviet Union, Scandinavia, Germany, and other European countries as an adrenal adaptogen with actions similar to Siberian ginseng. Rhodiola may help endurance, cognitive function, immune function, weight loss, athletic performance, and energy levels.

• Glycyrrhiza glabra is commonly known as licorice, a plant with a variety of actions in the body. Glycyrrhiza assists with recovery from long term stress by increasing the half life of cortisol. Licorice blocks leukotrienes and therefore possesses anti-inflammatory capabilities. Glycyrrhiza is often used as a demulcent to heal the digestive tract and as an anti-viral and antioxidant. Those with high blood pressure must use caution when ingesting licorice, as it may worsen hypertension in some people.

When to take Adrenal Support?

As a dietary supplement, take 3 capsules, 1-2 times daily, or as directed by your healthcare practitioner.

Because these cookies are strictly necessary to deliver the website, you cannot refuse them without impacting how our site functions. You can block or delete them by changing your browser settings and force blocking all cookies on this website.

If you do not want that we track your visist to our site you can disable tracking in your browser here:

We also use different external services like Google Webfonts, Google Maps and external Video providers. Since these providers may collect personal data like your IP address we allow you to block them here. Please be aware that this might heavily reduce the functionality and appearance of our site. Changes will take effect once you reload the page.